Helsinki, Finland – November 22, 2022: “DUCKTAIL”, a Vietnam-based cyber crime operation discovered by WithSecure™ (formerly known as F-Secure business) earlier this year, has continued to evolve their operations, according to a new analysis.

Since 2021, DUCKTAIL has used LinkedIn to target individuals and organizations operating on Facebook's Ads and Business platform in order to hijack Facebook Business accounts.

Following the exposure of DUCKTAIL’s activities in a report published during the summer, the group has changed the way they operate to evade defenses and expand its operations.

"We don't see any signs of DUCKTAIL slowing down soon, but rather see them evolve rapidly in the face of operational setbacks. Up to this point, the operational team behind DUCKTAIL was seemingly small, but that has changed," said Mohammad Kazem Hassan Nejad, Researcher for WithSecure Intelligence.

Recent DUCKTAIL activity observed since early September featured several changes to their mode of operation, including: 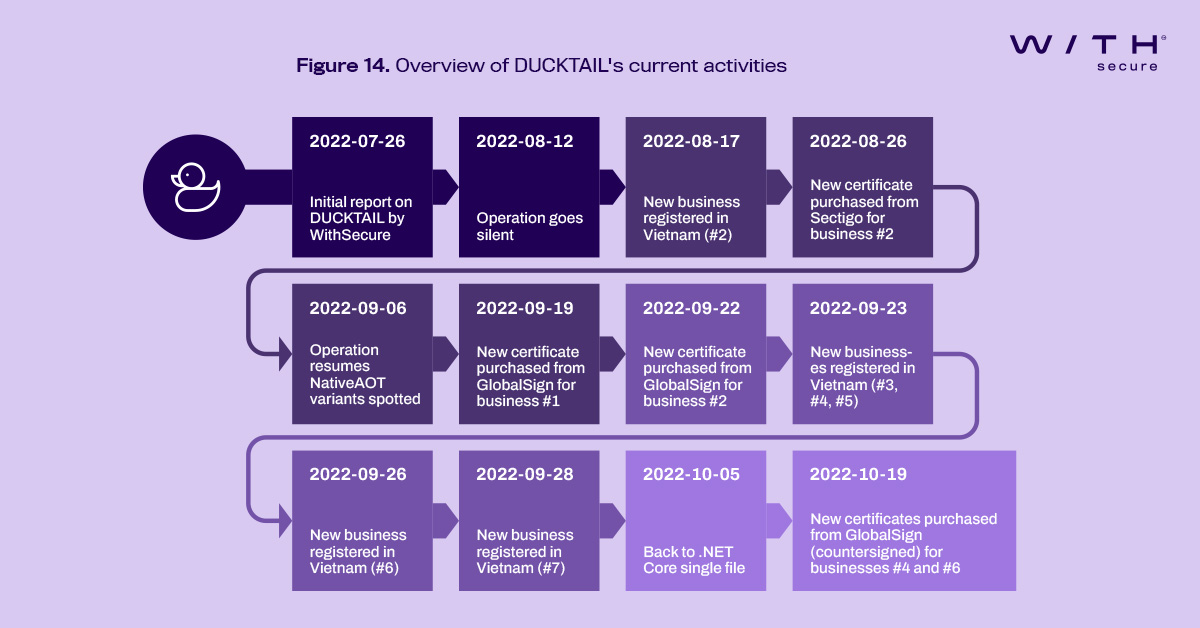 “Ransomware attacks get a lot of attention, but threats such as DUCKTAIL can cause substantial financial and branding damage and shouldn’t be overlooked,” said Paolo Palumbo, Vice President of WithSecure Intelligence. “With the increased activity, new affiliates, and fake businesses, we expect an increase in DUCKTAIL related incidents for the foreseeable future.”

DUCKTAIL in the trenches

According to WithSecure™ Global Head of Incident Response John Rogers, these kinds of threats are challenging for companies to manage due to the lack of separation between personal and business accounts.

“Using the same resources for both personal and business can be quite problematic. For example, investigating a possible DUCKTAIL incident may require logs about an individual’s Facebook history, which can have many unanticipated operational, ethical, and legal implications. It’s an issue that concerns organizations and their employees, so they both need to understand the risks in these situations,” he said.

Defenders can take the following steps to protect themselves from DUCKTAIL and similar threats:

The full analysis is available at https://labs.withsecure.com/publications/ducktail-returns.

Additional information on DUCKTAIL is available at https://labs.withsecure.com/publications/ducktail.