Cloud Security: Striking the balance between risk, speed, and cost

Cloud security, especially at scale, can be a challenging thing to get right. Engineers want the freedom to innovate, organizations want to keep costs down, while security, risk, and compliance are sometimes treated as an afterthought. Managing these conflicting priorities is a struggle for many of the organizations I work with.

Getting this balance wrong has delayed a number of the cloud migrations on which I’ve consulted and increased the security risks during the process. Fundamentally, building an effective cloud security program is about finding a balance that matches your risk profile and works with the culture of your engineering teams. There is no cloud security posture or approach that is right for everybody, but it is possible to build one that works for your organization.

Organizations want to be quick to market, they want to be secure, and most importantly, they want to be efficient with the resources and budgets they have available. From years of advising clients on the cloud, I’ve found that failing to achieve a balance can lead to spiraling costs and increased demands on both security and engineering teams. If the costs become too great, you might find that the pace at which you can move and the safety with which you can do so are threatened.

Here are the two basic principles that I think you need to keep in mind when building a robust and secure multi-cloud program:

The cloud promises speed. It promises to reduce the time to market for new applications, to shorten outages, to speed up bug fixes, and to boost the efficiency of developers. Speed, in turn, holds the promise of lower costs. But if the relationship between velocity and security is not handled well, these promises may not be fulfilled. Upset the balance between velocity and security, and you may find the costs of your cloud migration increasing. 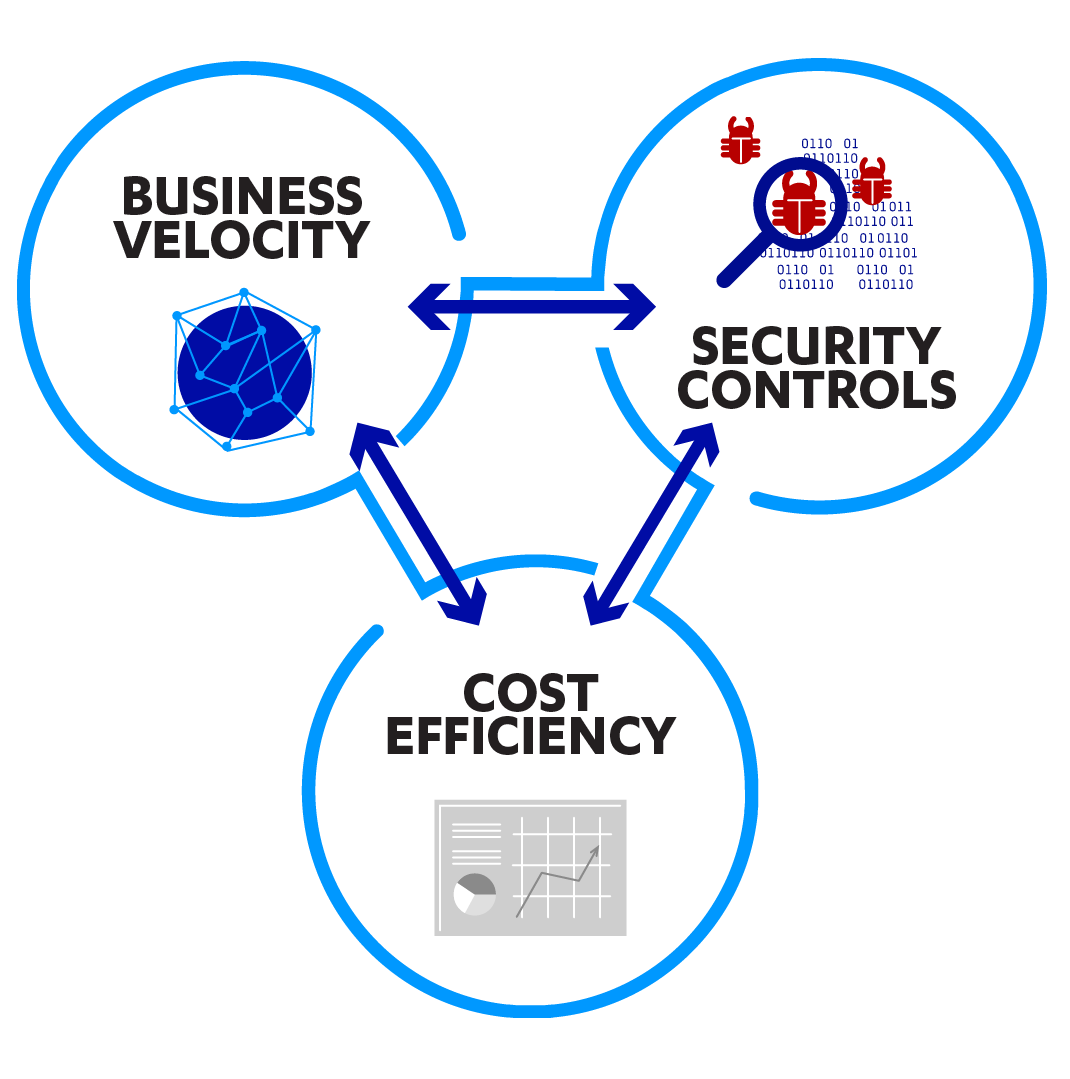 So, what happens when things become unbalanced?

My team and I have seen countless cases where organizations have moved to the cloud without adequate input from security teams. Occasionally, we’ve come across cases where business objectives have mandated a shift to the cloud at such a velocity that making it secure by design from the start is impossible. In our experience, this leads to increased risk until sufficient security can be introduced, and the costs of retrofitting security into existing environments can be surprisingly high.

Recently, we helped a European utilities organization understand their security posture across a number of cloud environments that were managed both by in-house teams and by third parties. We found that the security posture of the individual environments varied enormously, which exposed the organization to significant risk. A large migration program was created to bring all existing cloud resources under a single management structure to support centralized security and risk management. This led to significant cost, and delays on other transformation projects in the organization while critical resources were diverted to deliver the cloud migration.

We’ve also seen the opposite, where too much emphasis on security has hindered migration programs. In one case, I aided a US-based financial services organization in a digital cloud transformation project that was designed to increase business velocity. Before I arrived, the internal security team had insisted on enforcing a broad range of security controls. These controls were built on assumptions rooted in legacy thinking and were tied to their existing on-premises estates. Crucially, they failed to understand the impact of these security controls on engineering teams. As a result, business velocity collapsed, and there was a dramatic increase in the cost of the cloud migration program.

In my experience, security designed without input from engineering teams introduces unintended additional complexity and cost. The most effective security programs my team have supported have all involved close collaboration between security and engineering.

Security exists to support the organization and to ensure that the business objectives are met in a manner that matches the organization’s risk profile. The key to this is early, regular, and effective communication between the engineering stakeholders, leadership, and the security teams within an organization.

Principle 2: Start early and speak to your people

Security is foundational: it doesn’t work when it’s treated as an afterthought or an impediment. It is possible to retrofit security, but the costs and resources required to do so are dramatically increased compared to getting it right at the start.  My first recommendation on any cloud migration project is always to ensure that you bring the right stakeholders in at each stage of the design and implementation process. Below are some of the stakeholders I recommend speaking with, and the kinds of topics to cover with each:

With a well-balanced cloud security strategy, you will find that it is possible to lower your risks and keep your costs under control. In my experience, there is no one-size-fits-all model for how to do this, but there are general principles that can guide you to the right choices for your organization. If you balance speed with building appropriate security controls, and involve stakeholders from across your organization, you are well positioned for a successful, secure migration.